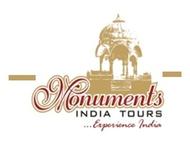 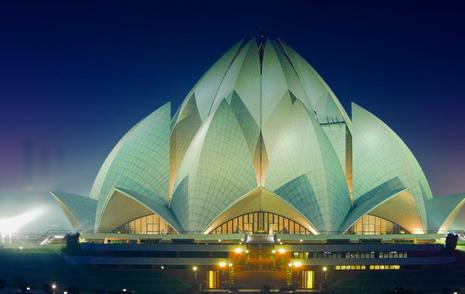 Humayun's tomb is the tomb of the Mughal Emperor Humayun in Delhi, India. The tomb was commissioned by Humayun's son Akbar in 1569-70, and designed by Mirak Mirza Ghiyas, a Persian architect chosen by Bega Begum. It was the first garden-tomb on the Indian subcontinent, and is located in Nizamuddin East, Delhi, India, close to the Dina-panah citadel also known as Purana Qila that Humayun founded in 1533. It was also the first structure to use red sandstone at such a scale.

The tomb was declared a UNESCO World Heritage Site in 1993. It represented a

The site was chosen on the banks of Yamuna river, In later Mughal history, the last Mughal Emperor, Bahadur Shah Zafar took refuge here, during the Indian Rebellion of 1857, along with three princes, and was captured by Captain Hodson before being exiled to Rangoon.[8][20] At the time of the Slave Dynasty this land was under the 'KiloKheri Fort' which was capital of Sultan Kequbad, son of Nasiruddin (1268–1287). 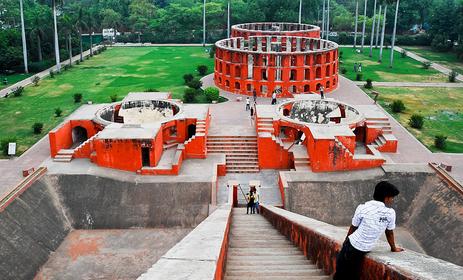 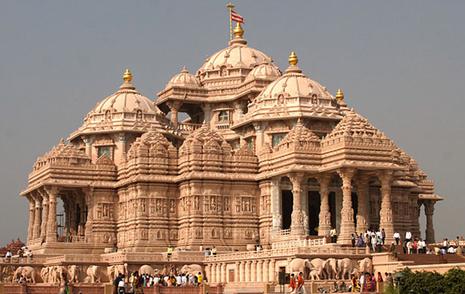 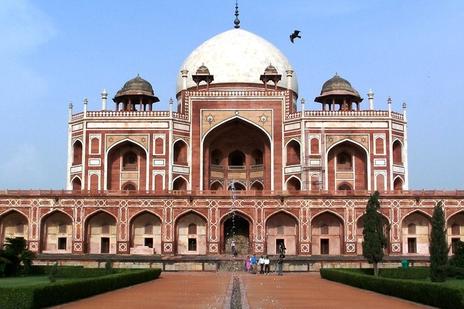 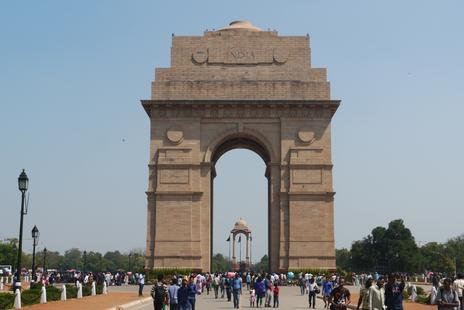 Qutb Minar, at 72 meters, is the tallest brick minaret in the world and is a UNESCO World Heritage Site.

In 1200 AD, Qutb al-Din Aibak, the founder of the Delhi Sultanate started construction of the Qutb Minar. In 1220, Aibak's successor and son-in-law Iltutmish added three storeys to the tower. In 1369, lightning struck the top storey, destroying it completely. So, Firoz Shah Tughlaq carried out restoration work replacing the damaged storey with two new storeys every year, made of red sandstone and white marble.

Jama Masjid in Delhi, is one of the largest mosques in India.

It was built by Mughal emperor Shah Jahan between 1644 and 1656 at a cost of 1 million rupees. The mosque was completed in 1656 AD with three great gates, four towers and two 40 m high minarets constructed of strips of red sandstone and white marble.

The courtyard can accommodate more than 25,000 persons. There are three domes on the terrace which are surrounded by the two minarets. On the floor, a total of 899 black borders are marked for worshippers. The architectural plan of Badshahi Masjid, built by Shah Jahan's son Aurangzeb at Lahore, Pakistan, is similar to the Jama Masjid.

Get your India Travel Quote NOW !​

The temple, which attracts approximately 70 percent of all tourists who visit Delhi, was officially opened on 6 November 2005 by Dr. A.P.J. Abdul Kalam. It sits near the banks of the Yamuna adjacent to the 2010 Commonwealth Games village in eastern New Delhi. The temple, at the centre of the complex, was built according to the Vastu shastra and Pancharatra shastra.

The Lotus Temple, located in New Delhi, India, is a Bahá'í House of Worship completed in 1986. Notable for its flower like shape, it serves as the Mother Temple of the Indian subcontinent and has become a prominent attraction in the city. The Lotus Temple has won numerous architectural awards and been featured in hundreds of newspaper and magazine articles.

Like all Bahá'í Houses of Worship, the Lotus Temple is open to all, regardless of religion or any other qualification. The building is composed of 27 free-standing marble-clad "petals" arranged in clusters of three to form nine sides, not in citation given] with nine doors opening onto a central hall with height of slightly over 40 metres[3] and a capacity of 2,500 people.

A 2001 CNN report referred to it as the most visited building in the world. 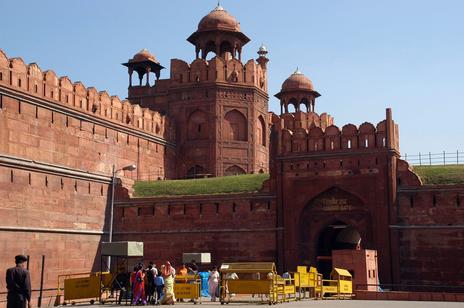 Details of Places of Interest

​The Red Fort was the residence of the Mughal emperor for nearly 200 years, until 1857. It is located in the center of Delhi and houses a number of museums. In addition to accommodating the emperors and their households, it was the ceremonial and political centre of Mughal government.

Constructed in 1648 by the 5th Mughal Emperor Shah Jahan the Red Fort is named for its massive enclosing walls of red sandstone. It was designated a UNESCO World Heritage Site in 2007.

On Independence Day (15 August), Prime Minister of India hoists the 'tricolor' national flag at the main gate of the fort.​

The India Gate, (originally called the All India War Memorial), is a war memorial located astride the Rajpath, on the eastern edge of the ‘ceremonial axis’ of New Delhi, India, formerly called Kingsway.

India Gate is a memorial to 82,000 soldiers of the undivided Indian Army who died in the period 1914–21 in the First World War, in France, Flanders, Mesopotamia, Persia, East Africa, Gallipoli and elsewhere in the Near and the Far East, and the Third Anglo-Afghan War. 13,300 servicemen's names, including some soldiers and officers from the United Kingdom, are inscribed on the gate. The India Gate, even though a war memorial, evokes the architectural style of the triumphal arch like the Arch of Constantine, outside the Colosseum in Rome, and is often compared to the Arc de Triomphe in Paris, and the Gateway of India in Mumbai. It was designed by Sir Edwin Lutyens. 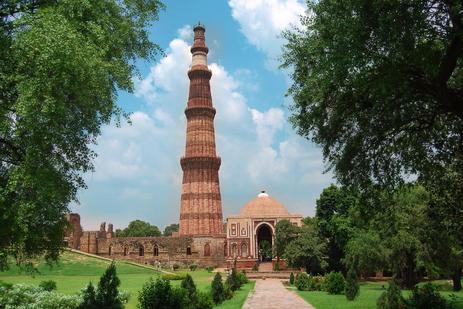 The Jantar Mantar is located in the modern city of New Delhi. It consists of 13 architectural astronomy instruments. The site is one of five built by Maharaja Jai Singh II of Jaipur, from 1723 onwards, as he was given by Mughal emperor Muhammad Shah the task of revising the calendar and astronomical tables. Later research, though, suggests 1724 as the actual year of construction.

The primary purpose of the observatory was to compile astronomical tables, and to predict the times and movements of the sun, moon and planets. Some of these purposes nowadays would be classified as astronomy.

Completed in 1724, the Delhi Jantar Mantar had decayed considerably by 1867. 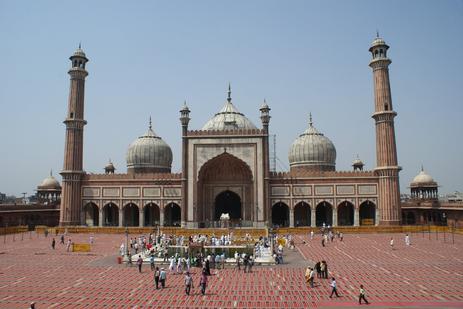